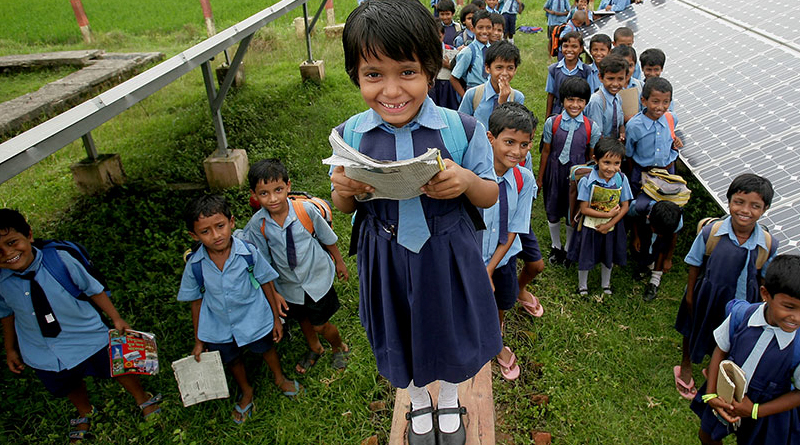 India has recently signed an agreement with the World Bank to borrow over $1bn, with a view to developing the country’s burgeoning solar power sector. Already, it has ambitions to install 100GW by 2022 – despite the fact that the currently installed figure stands at only 7GW. Nevertheless, India has already proven its commitment, its capacity up from just 20MW in 2011.

The project’s aim reflects Indian Prime Minister Narendra Modi’s statement at COP21: “The world must turn to the sun to power our future. As the developing world lifts billions of people into prosperity, our hope for a sustainable planet rests on a bold, global initiative.”

The country’s ‘green promise’ was to install 175GW of renewable power by 2022 – mostly solar. The figure is highly ambitious considering that in 2014 the worlds entire installed solar capacity was 181GW. Nevertheless, the goal is achievable.

Following the UN climate talks, India offered to reduce the intensity of its emissions – the amount of pollution per unit of economic output – by around a third by 2030, as measured against 2005 levels. Doing so through solar means it can address the all-important issue of energy poverty while contributing to economic development at the same time.

One in four people in India still do not have access to electricity – an issue that stops poorer communities from going to work and receiving an education. Of 250m households, 56m struggle to maintain electricity, the majority of which are located in rural areas. Off-grid solar installations, suitable for single homes or small clusters of buildings, could prove extremely helpful in these areas.

Many students in rural areas are unable to go to school, as they are either not equipped due to lack of technology – even basic needs such as adequate light – or forced into work at a young age. Solar power would not only better the country’s education system, but create thousands of well-paid jobs within the industry itself.

Staring at the sun

Officially the second most populous country in the world, India is the ideal platform from which to generate solar power. An average of 300 sunny days per year means the country can almost guarantee efficient and constant production of solar power. It also leads the Global Solar Alliance, a group of 121 countries which recently signed an agreement with the World Bank to mobilise $1trn in investment by 2030.

The agreement between India and the World Bank is the largest financing round for solar power in any country to date. The international financial institution said it “supports India’s ambitious initiatives to expand solar through investments in solar generation”. Here, it includes rooftop technology, infrastructure for solar parks, innovative solar and hybrid technologies, and transmission lines for solar-rich states.

An estimated $625m will go towards the Grid Connected Rooftop Solar Program. According to the World Bank, the project will finance the installation of at least 400MW of solar photovoltaic installations to provide clean, renewable energy, and reduce greenhouse gas emissions by displacing thermal generation. A further $200m will be used to develop a shared infrastructure for the Solar Parks Project, under a public-private partnership model.

India is in need of energy investment, and it seems solar power is the way forward, due to its location and stage of development. Provided supply and production is distributed evenly across communities, solar power could make a huge difference to the lives of those living in poverty. It also means a potential rise in employment, greater profits for solar companies and cheaper energy for consumers