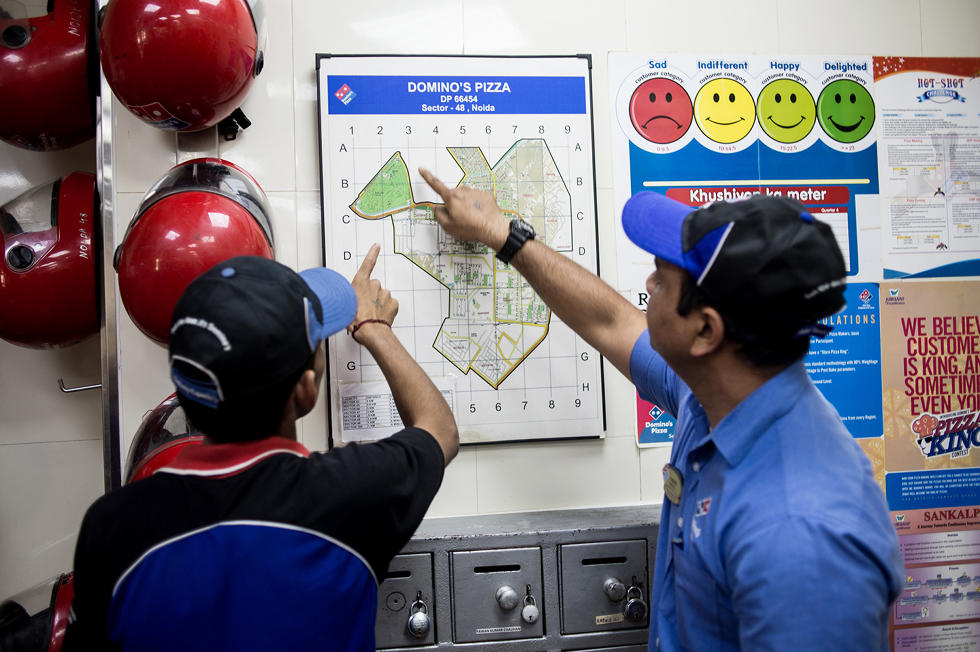 These four big brands reached new customers with successful door drop marketing techniques. Find out how you could too…

You have three seconds to grab my attention. How? Well, according to Helen Sawyer, client director at The Leaflet Company, that’s how long the average consumer spends looking at the materials that land on their doorstep.

However, the stronger and more compelling the message, design, and format, the more likely it is those three seconds will dramatically increase. According to research from Royal Mail MarketReach report The Private Life of Mail, if a door drop is retained –  it can be kept in the home for 38 days on average. So it makes sense to learn some of the tricks of the trade from big brands and their successful campaigns, doesn’t it.

Here, we reveal the cunning secrets employed by four well-known brands to grab a consumer’s attention.

Be strategic, be targeted

Precision marketing is something the ubiquitous pizza franchise Domino’s excels at, says Melanie Welsh, executive planning director at digital agency Havas helia. “For that company it’s about understanding which are the more affluent households, and then targeting those people, right down to a precise street,” she says.

Pointing to its ability to target and plan, she says “campaigns are planned 13 months in advance and everything is mapped out really carefully”.

Rather than posting door drops as soon as the leaflets leave the printing press, the deliveries are highly strategic, says Welsh. “It has identified its sweet spot as the week that people get paid, so it plans around that and books its door drops in accordingly.

“If, for some reason, it can’t get that week, it opts for the week after – but what it never does is book the week before, because the last week before payday is a no-pizza week. I think that’s a wonderful insight and very smart.”

Door drops for Domino’s are the second most effective media channel after TV, adds David Beale, MD of response, data and analytics at MediaCom Response. That’s why the company spends £10m a year on it.

Get creative to elicit consumer interaction

If you can get a consumer to interact with your marketing you’re probably half way there. Whether it’s a physical, digital or other response, there’s a greater likelihood that you’ll see a return on your investment.

Gavin Wheeler, CEO of CRM agency WDMP, worked with Freeview on its campaign to promote sign-ups to and use of high-definition television. He says the aim was to find a creative but simple way to capture people’s attention.

“With Freeview, we produced a pink feather that we dropped when the brand launched HD. The concept was to emphasise the quality of HD: it’s so real you can almost see those pink flamingos on the wildlife programme – it’s almost like they’re in your living room.”

Build a customer profile, then target where they live

Big strides have been made in targeting and profiling customers in recent years, says WDMP’s Gavin Wheeler.

The more traditional approach to this is to use geodemographics, an approach that identifies likely characteristics of people in an area based on their combined profile.

In order to exploit this, your business first needs to understand who its core customers are – their age, gender, purchasing history, and extras such as which special offers they respond to most. You can do this by creating a loyalty or membership scheme. Once you have that and can pinpoint on a map where more of them appear to live, you’ll have a target radius for your door drop materials.

This is the approach Wyevale Garden Centres took, says Wheeler. “It uses door drops to target a specific market that regularly attends garden centres, and then overlays the data with geodemographics – and this works because we know that similar people live in similar areas to each other.

“We’re able to take this information further now by using a new mine of digital data to understand people’s behaviour. We know what their current interests are and can use that to decide whether they’re in the market for a particular product.”

Plan a campaign that avoids uncertainty and promotes loyalty

When multi-national conglomerate Bestway Group acquired The Co-operative Group’s pharmacy business in 2014 and re-branded it Well Pharmacy, there was an important PR job to be done.

Customers living near one or more of Co-operative Pharmacy’s 780 branches around the UK needed to know it was business as usual, despite the name change. Bestway also needed to stagger the process of communication as not every branch was converted to Well Pharmacy overnight.

Door drops provided the best solution. As client director of The Leaflet Company Helen Sawyer points out, “no other form of media would be effective. Radio and local newspapers weren’t appropriate because there was often more than one branch in a town, and one would be changing and one wouldn’t”.

“We knew that the message the client was going for was reassurance – it wanted current customers to understand that the pharmacy was staying at the heart of the community and that Well Pharmacy would continue to provide expert care.”

The Leaflet Company created leaflets with three-tiered vouchers which encouraged customers to keep them in their house. Tiered marketing programmes set milestones that customers must pass, whether that’s pounds spent, points earned, or friends referred. This approach not only increases customer engagement, but increases the longevity of your leaflets if people need to hang on to them to claim further rewards.

As more stores were converted, the campaign expanded to radio, press and digital marketing. The happy result was that voucher redemption rates were “exponentially” high, with Sawyer deeming the campaign “fantastically successful” thanks to the fact the new brand was seen in a positive light.

In today’s market, it’s increasingly difficult to grab a consumer’s attention amongst all the noise of competitors but, with door drop marketing, you have the chance to make an impression with a physical message that’s relevant to your audience.

As the four brands featured above demonstrate, when done effectively, this efficient marketing method can help you successfully target customers and increase engagement and loyalty.