10 of Nikola Tesla’s Most Amazing Predictions

As a technology-obsessed culture, we love our tech heroes. The champions of the tech industry are treated like rock stars, and their announcements of new gadgetry reverberate with billions of people around the world.

One of the original tech superstars was the Serbian inventor Nikola Tesla(1856-1943), who held nearly 300 patents and was responsible for such breakthrough tech as the alternating current. His popularity fluctuated during his lifetime but has peaked in recent years. By now he’s become more than a cult hero. Tesla’s name graces one of the most news-worthy tech companies of our time and his predictions of future tech have made him a veritable oracle of our times.

What did Tesla predict that has come true? And what’s still waiting in the wings of progress?

Tesla envisioned a wireless device that would incorporate video and telephone technology and work over a network very much like the Internet.

Doesn’t this description by Tesla from 1926 sound like a smartphone to you?

“When wireless is perfectly applied the whole earth will be converted into a huge brain, which in fact it is, all things being particles of a real and rhythmic whole. We shall be able to communicate with one another instantly, irrespective of distance. Not only this, but through television and telephony we shall see and hear one another as perfectly as though we were face to face, despite intervening distances of thousands of miles; and the instruments through which we shall be able to do his will be amazingly simple compared with our present telephone. A man will be able to carry one in his vest pocket.”

It follows that a guy who was very much obsessed with wireless technology could envision wi-fi and how wireless devices would work:

“Present wireless receiving apparatus will be scrapped for much simpler machines; static and all forms of interference will be eliminated, so that innumerable transmitters and receivers may be operated without interference. It is more than probable that the household’s daily newspaper will be printed ‘wirelessly’ in the home during the night. Domestic management—the problems of heat, light and household mechanics—will be freed from all labour through beneficent wireless power.”

Yep, he figured this would happen. It only took 118 years to make it a reality in an effort led by his namesake company and another larger-than-life innovator in Elon Musk.

“As early as 1898, I proposed to representatives of a large manufacturing concern the construction and public exhibition of an automobile carriage which, left to itself, would perform a great variety of operations involving something akin to judgement”.

One of Tesla’s lifelong projects involved wireless transmission of energy across great distances. He saw it as a potential revolution in energy generation and consumption. This is something we are still struggling to understand and implement. 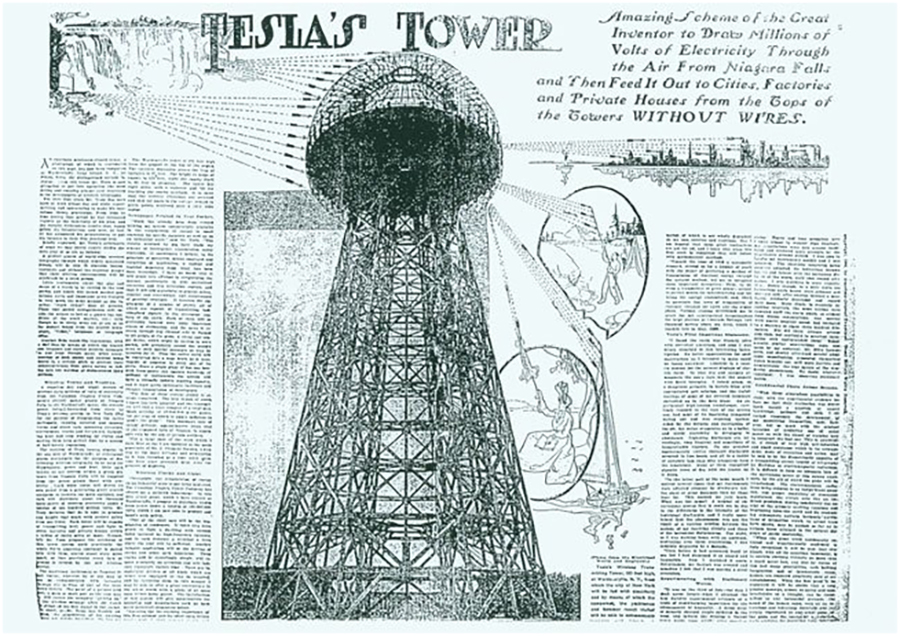 Here’s how he described the idea in this 1926 interview with Collier’s Magazine:

“When the wireless transmission of power is made commercial, transport and transmission will be revolutionized. Already motion pictures have been transmitted by wireless over a short distance. Later the distance will be illimitable, and by later I mean only a few years hence. Pictures are transmitted over wires—they were telegraphed successfully through the point system thirty years ago. When wireless transmission of power becomes general, these methods will be as crude as is the steam locomotive compared with the electric train.”

Tesla’s work on a power generator that could transmit energy wirelessly actually did result in the partial construction of the Tower of Power in 1904 in Shoreham, Long Island, New York. It was 187 feet high, while its spherical top was 68 feet in diameter. The tower was curiously destroyed in 1917 by the U.S. Government on suspicion of it being used by German spies.

This is how Tesla described what he was trying to accomplish:

“My power generator will be of the simplest kind – just a big mass of steel, copper and aluminium, comprising a stationary and rotating part, peculiarly assembled. I am planning to develop electricity and transmit it to a distance by my alternating system now universally established. The direct current system could also be employed if the heretofore insuperable difficulties of insulating the transmission lines can be overcome.

Such a source of power obtainable everywhere will solve many problems with which the human race is confronted. My alternating system has been the means of harnessing 30,000,000 horsepower of waterpower, and there are projects now going on all over the world which will eventually double that amount. But, unfortunately, there is not enough water power to satisfy the present needs, and everywhere inventors and engineers are endeavouring to unlock some additional store of energy.”

This idea follows from the ability to transmit energy without wires over long distances.

“Perhaps the most valuable application of wireless energy will be the propulsion of flying machines, which will carry no fuel and will be free from any limitations of the present airplanes and dirigibles. We shall ride from New York to Europe in a few hours. International boundaries will be largely obliterated and a great step will be made toward the unification and harmonious existence of the various races inhabiting the globe. Wireless will not only make possible the supply of energy to region, however inaccessible, but it will be effective politically by harmonizing international interests; it will create understanding instead of differences.”

Tesla worked on a particle beam weapon in the later years of his life that he hoped would end all wars. It would be so powerful that it would easily destroy anything the enemy would throw your way, even hundreds of miles away. If every country had such a weapon, war would be meaningless. While the ray was never built (and the plans for it mysteriously lost), the concept of mutually assured description was the cornerstone of the Cold War, as the sides with nuclear weapons did not dare attack each other.

As an intriguing side note, the man charged by the FBI with going over Tesla’s notes after his death was none other than the M.I.T. ProfessorJohn G. Trump, the uncle of the current U.S. Presidential candidate Donald Trump. He concluded that there was nothing useful in Tesla’s paperwork, but it wouldn’t be the first time a government agency didn’t tell the whole truth, would it?

Perhaps inspired by Tesla’s Death (aka Peace) Ray, this video from U.S. Navy shows that perhaps the idea is still yet to become real:

He expanded on some seemingly outlandish ideas in an interview in 1933. In modern application, this particular invention would be more like an MRI, which can do some of what Tesla is talking about here:

“I expect to photograph thoughts. In 1893, while engaged in certain investigations, I became convinced that a definite image formed in thought, must by reflex action, produce a corresponding image on the retina, which might be read by a suitable apparatus…Now if it be true that a thought reflects an image on the retina, it is a mere question of illuminating the same property and taking photographs, and then using the ordinary methods which are available to project the image on a screen… If this can be done successfully, then the objects imagined by a person would be clearly reflected on the screen as they are formed, and in this way every thought of the individual could be read. Our minds would then, indeed, be like open books.”

Perhaps it goes without saying that any vision of the future would include flying cars. Tesla’s was no different. Perhaps we finally get this in the next few years?

“I foresee the development of the flying machine exceeding that of the automobile, and I expect Mr.  Ford to make large contributions toward this progress.  The problem of parking automobiles and furnishing separate roads for commercial and pleasure traffic will be solved.  Belted parking towers will arise in our large cities, and the roads will be multiplied through sheer necessity, or finally rendered unnecessary when civilization exchanges wheels for wings.”

Tesla demonstrated a remote controlled boat at an Electrical Exhibition atNew York’s Madison Square Garden in 1898. His antennae-equipped 4-foot-long boat went around a small pool of water, flashing lights and was perceived largely as magic. Military minds saw this boat’s potential application as a torpedo, while Tesla conceived of a variety of uses for remote-controlled machines, a fact we can testify to today. We have numerous remote controlled devices all over our houses and the military has certainly made much use of long distance weaponry, from missiles to drones. 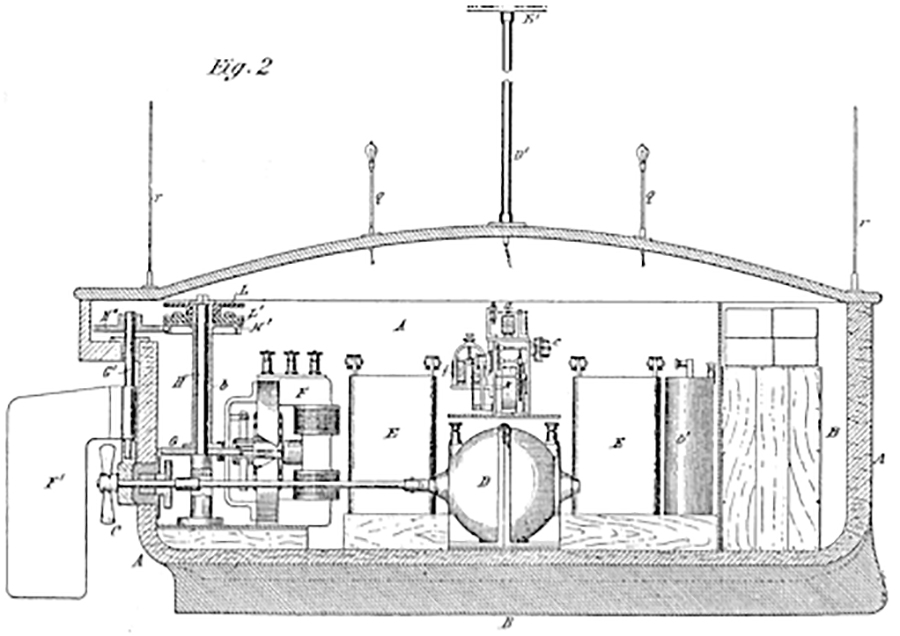 While this isn’t a technological invention, Tesla very much envisioned a world when women would hold traditionally male jobs and would, in fact, become “superior” to them. As the U.S. Presidential election features the first-ever female nominee for the world’s highest office, Tesla’s predictions in this matter might be reaching an apex.

“This struggle of the human female toward sex equality will end in a new sex order, with the female as superior.