How Kanye West and Adidas are conquering the millennial market

The word “drop” is now firmly lodged in my vocabulary after another day spent with a millennial waiting for a brand to release (or “drop”) its latest product. It involved watching the clock tick down to the moment of release, a race to place an order, and much hype on social media over what was – or was not – bagged.

The product was a pair of shoes (the Yeezy Boost 350 v2) designed by rapper-cum-designer Kanye West for sportswear giant Adidas. It’s not the first time the two have collaborated and had a sell-out product launch. Nor are they the pioneers of this new marketing strategy – skatewear brands Supreme and Palace are among the masters of the art. The whole process is an increasingly common part of millennial consumption and the epitome of some profound changes facing marketers.

Drops work something like this: a sportswear brand pushes out messages via its social media channels that a new product is going to be launched. To be effective, the drop will involve a highly distinctive product that is limited in quantity, endorsed by a celebrity and with a premium price tag. To further heighten the sense of expectation, the drop is appropriately timed and visible on company websites permitting consumers to count down to it.

In the most recent case, news about the latest Yeezy shoes dripped out over the summer, resulting in two months of buzz on social media. The era of Instagram and Snapchat is an essential part of the process – social media enables millennials all over the world to readily discuss the products they covet.

This digital word-of-mouth marketing is a joy for a brand’s bottom line. Rather than having to spend money on expensive advertising or promotions, consumers do their marketing for them. Instead, the brands can spend big on product endorsers, like West.

Drop it like it’s hot
On the day of a drop, the buzz on social media is normally intense with friends and followers engaged in frenzied activity you generally do not find associated with other products. Most of the people who sit online waiting to click “buy” on their devices never actually get anywhere near the product.

One reason for this is that some drops have become such hyped affairs that the technological infrastructure of retailers simply can’t cope with the sudden surge in traffic that takes place once the countdown clock reaches zero. Nonetheless, the products sell out in seconds.

For the small minority of successful buyers, there is normally one primary response and one of two secondary responses. Success brings a sense of victory to a process characterised by competing to consume, alongside the satisfaction of owning a highly desired, branded product. Some will keep the product, and some don’t.

Those who don’t, sell their shoes on secondary markets like eBay. Having dropped at £150 through official channels, new Yeezys were available on the auction site minutes afterwards. At one stage on Saturday, the shoes’ price on the online auction site had reached £1,500. Dropped sportswear has rapidly become one of the most popular product categories on eBay. 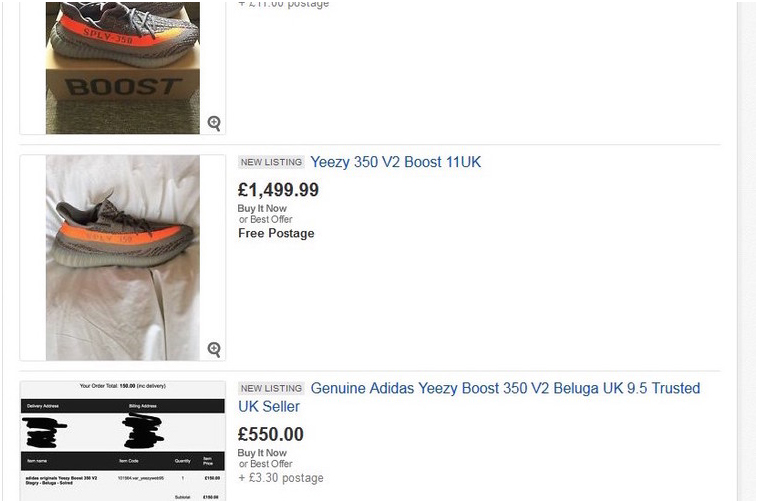 Yeezys for sale on eBay shortly after the drop. Simon Chadwick

For those unlucky to have missed out, the post-purchase experience is again one lived out on social media. Comments posted by those whose click wasn’t fast enough reveals a heady combination of myth-making, urban legend and bitter recrimination. At least until next time, when another drop takes place.

Age-old tactics
In some ways, what the world of sportswear witnesses during drops is an age-old tactic. Limiting the availability of a product is a common practiceand in simple terms this is all these drops are doing. Hyped launches and limited editions have long been used by marketers to boost sales. And products are often re-sold, whether at car boot sales or via small ads in newspapers.
However, waiting online for a drop while discussing it on social media seems to have become a distinctly 21st-century phenomenon. It is more than a convergence of buzz and word-of-mouth marketing. Nor is it simply just another online gimmick designed to turn over product units. Drops reveal something much more about millennials’ process of consumption and their experiences of it.

Even for physical products, it is now becoming increasingly clear that the millennial generation is content to do their shopping in a virtual world of mutual advice, support and story-telling. Plus, this world is inhabited by people from across the globe, rather than from the local neighbourhood, who create their image and identity via conversations with people they have never met before.

The importance of celebrities seems too to be more important than ever, as we see in Adidas’ relationships with musicians like West, Pharrell Williams and Stormzy. Sportswear has become a lifestyle statement and products are laden with meaning. Getting the right names and faces with one’s brand is a vital part of a marketer’s decision making.

At the same time, drops are experiences, albeit uncertain ones. Whereas people used to drive or take buses to malls safe in the knowledge that they would find the product they were seeking in a shop, now younger consumers stay at home and wait for the chance to buy a product. This is a process at the end of which the consumer may fail to make a purchase. Competing to consume may be thrilling, but it is probably very disappointing too.

Drops are also an issue for retailers, the latest batch of website crashes testing their ability to trade in an online environment where huge traffic effectively incapacitates organisations, sometimes for considerable periods of time. For millennials though, this may also be part of the experience.

Google will bring free Wi-Fi to the whole world through Google Station
Traffic Is Fake, Audience Numbers Are Garbage, And Nobody Knows How Many People See Anything